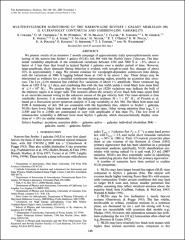 We present results of an intensive 2 month campaign of approximately daily spectrophotometric monitoring of the narrow-line Seyfert 1 galaxy (NLS1) Ark 564 with the Hubble Space Telescope. The fractional variability amplitude of the continuum variations between 1365 and 3000 Å is ~6%, about a factor of 3 less than that found in typical Seyfert 1 galaxies over a similar period of time. However, large-amplitude, short timescale flaring behavior is evident, with trough-to-peak flux changes of about 18% in approximately 3 days. We present evidence for wavelength-dependent continuum time delays, with the variations at 3000 Å lagging behind those at 1365 Å by about 1 day. These delays may be interpreted as evidence for a stratified continuum reprocessing region, possibly an accretion disk structure. The Lyα λ1216 emission line exhibits flux variations of about 1% amplitude. These variations lag those at 1365 Å by <~ 3 days, and combining this with the line width yields a virial black hole mass limit of <~ 8 × 106 Msun. We caution that the low-amplitude Lyα λ1216 variations may indicate the bulk of the emission region is at larger radii. This scenario affects the veracity of our black hole mass upper limit in an uncertain manner owing to the unknown nature of the gas velocity field. Our mass estimate is thus unreliable; however, it is consistent with the independent estimate M ~ 1 × 107 Msun of Pounds et al. based on a fluctuation power spectrum analysis of X-ray variability in Ark 564. The black hole mass and 5100 Å luminosity of Ark 564 are consistent with the hypothesis that, relative to Seyfert 1 galaxies, NLS1s have lower black hole masses and higher accretion rates. Other strong emission lines (e.g., C IV λ1549 and He II λ1640) are constrained to vary with amplitudes of less than 5%. This low level of emission-line variability is different from most Seyfert 1 galaxies, which characteristically display variations of ~10% on similar timescales.