The Ellipticity of the Disks of Spiral Galaxies 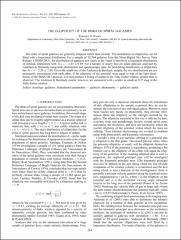