Discovery of a Very Bright, Nearby Gravitational Microlensing Event 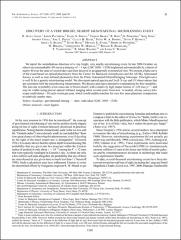 We report the serendipitous detection of a very bright, very nearby microlensing event. In late 2006 October, an otherwise unremarkable A0 star at a distance of ~1 kpc (GSC 3656–1328) brightened achromatically by a factor of nearly 40 over the span of several days and then decayed in an apparently symmetrical way. We present a light curve of the event based on optical photometry from the Center for Backyard Astrophysics and the All Sky Automated Survey, as well as near-infrared photometry from the Peters Automated Infrared Imaging Telescope. This light curve is well fit by a generic microlensing model. We also report optical spectra and Swift X-ray and UV observations that are consistent with the microlensing interpretation. We discuss and reject alternative explanations for this variability. The lens star is probably a low-mass star or brown dwarf, with a relatively high proper motion of >~ 20 mas yr^−1, and may be visible using precise optical/infrared imaging taken several years from now. A modest, all-sky survey telescope could detect ~10 such events per year, which would enable searches for very low mass planetary companions to relatively nearby stars.