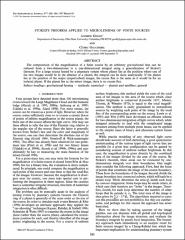 The computation of the magnification of a finite source by an arbitrary gravitational lens can be reduced from a two-dimensional to a one-dimensional integral using a generalization of Stokes's thereom. For a large source lensed by a planetary system whose planet lies at the position where one of the two images would be in the absence of a planet, the integral can be done analytically. If the planet lies at the position of the major (unperturbed) images, the excess flux is the same as it would be for an isolated planet. If the planet lies at the minor image, there is no excess flux.