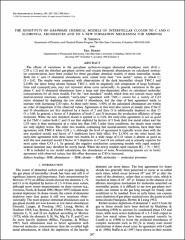 R. Terzieva and Eric Herbst, "The Sensitivity of Gas-Phase Chemical Models of Interstellar Clouds to C and O Elemental Abundances and to a New Formation Mechanism for Ammonia," The Astrophysical Journal 501, no. 1 (1998), doi: 10.1086/305811

The effects of variations in the gas-phase carbon-to-oxygen elemental abundance ratio (0.42 ≤ C/O ≤ 1.2) and the absolute gas-phase carbon and oxygen elemental abundances on calculated molecular concentrations have been studied for three gas-phase chemical models of dense interstellar clouds. Both the C and O elemental abundances were varied from their "low metal" values, in which C/O = 0.42. The results were compared with observations of the dark interstellar clouds TMC-1 and L134N, the latter being chosen because TMC-1, with its singularly rich component of large hydrocarbons and cyanopolyynes, may not represent dense cores universally. In general, variations in the gas-phase C and O elemental abundances have a large and time-dependent effect on calculated molecular concentrations for all three models. For the "new standard" model, which does not contain many rapid neutral-neutral reactions, excellent "early-time" agreement with TMC-1 occurs for a variety of C/O ratios obtained by depleting the low metal O abundance, but the time of best agreement tends to increase with increasing C/O ratio. At these early times, approx 80% of the calculated abundances are within an order of magnitude of the observed values. Agreement at this level also occurs at steady state if the C and O abundances are first depleted by a factor of 5 and then O is additionally depleted so that C/O ≥ 0.80. In general, a factor of 5 depletion of both C and O increases the production efficiency of large molecules. When the new standard model is applied to L134N, the early-time agreement is not as good as for TMC-1 unless both C and O are first depleted by factors of 5 from their low metal values and the C/O ratio is then maintained at a value less than 0.80. Under these conditions, the steady state results are only slightly worse. The other two models, containing fast neutral-neutral reactions, have their best agreement with TMC-1 when C/O ≥ 1, although the level of agreement is typically worse than with the new standard model, and factor of 5 depletions have little effect. For L134N, on the other hand, the early-time agreement with these latter two models for a wide range of C/O values is almost as good as with the new standard model if factor of 5 depletions in C and O are utilized and is actually superior for most cases when C/O ≥ 1. In general, the negative conclusions concerning models with rapid neutral-neutral reactions may therefore be overly harsh. When the newly studied rapid reaction H+_3+N→NH+_2 + H is included in our model calculations, the abundances of some N-containing species are in better agreement with observed values, but this effect decreases as C/O is increased.