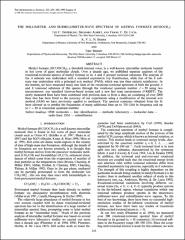 Methyl formate (HCOOCH_3), a threefold internal rotor, is a well-known interstellar molecule located in hot cores of giant molecular clouds. Over a decade ago, we published separate analyses of the rotational-torsional spectra of methyl formate in its A and E ground torsional substates. The analysis of the A substate was undertaken with a standard asymmetric top Hamiltonian, while that of the E substate was undertaken with a principal axis method (PAM), which was less than entirely satisfactory. In the interim, we have measured many new lines of the rotational-torsional spectrum of both the ground A and E torsional substates of this species through the rotational quantum number J = 50 using two spectrometers: our standard klystron-based system and a new fast scan spectrometer (FASSST). The newly measured lines have been combined with previous data to form a data set consisting of over 2000 lines that has been fitted to the accuracy of our experiments using a modification of the internal axis method (IAM) we have previously applied to methanol. The spectral constants obtained from the fit have allowed us to predict the frequencies of many additional lines up to 700 GHz in frequency and up to J = 50 in rotational quantum number.