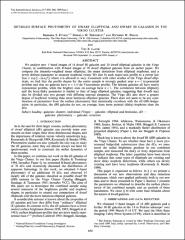 We analyze new V-band images of 14 dwarf S0 galaxies and 10 dwarf elliptical galaxies in the Virgo Cluster, in combination with R-band images of 70 dwarf elliptical galaxies from an earlier paper. We compute the intensity-weighted mean ellipticity, the mean deviations from elliptical isophotes, and a newly defined parameter to measure isophotal twists. We also fit each major-axis profile to a power law Σ(a) α exp[-(a/as)n], where n is allowed to vary. Consistent with other studies of the Virgo dwarf ellipticals, we find that the profile shapes for the entire sample is strongly peaked near n=1 (exponential profiles) and that no galaxies have n=1/4 (de Vaucouleurs profile). The faintest galaxies all have nearly exponential profiles, while the brighter ones on average have n<1. The correlation between ellipticity and the boxy/disky parameter is similar to that of large elliptical galaxies, suggesting that dwarfs may also be divided into two groups with differing internal dynamics. The Virgo dEs also show a greater degree of isophotal twisting than more luminous elliptical galaxies. There does not seem to be any combination of parameters from the surface photometry that statistically correlates with the dE/dS0 designation: in particular, the dS0 galaxies do not, on average, have more pointed (disky) isophotes than the dEs.