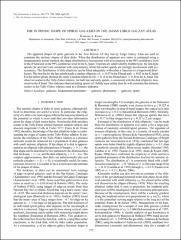 The apparent shapes of spiral galaxies in the Two Micron All Sky Survey Large Galaxy Atlas are used to constrain the intrinsic shapes of their disks. When the distribution of apparent axis ratios is estimated using a nonparametric kernel method, the shape distribution is inconsistent with axisymmetry at the 90% confidence level in the B band and at the 99% confidence level in the K_s band. If spirals are subdivided by Hubble type, the late-type spirals (Sc and later) are consistent with axisymmetry, while the earlier spirals are strongly inconsistent with axisymmetry. The distribution of disk ellipticity can be fitted adequately with either a Gaussian or a lognormal distribution. The best fits for the late spirals imply a median ellipticity of ε approx 0.07 in the B band and ε approx 0.02 in the K_s band. For the earlier spirals, the best fits imply a median ellipticity of epsilon approx 0.18 in the B band and epsilon approx 0.30 in the K_s band. The observed scatter in the Tully-Fisher relation, for both late and early spirals, is consistent with the disk ellipticity measured in the B band. This indicates that excluding spirals of Hubble type earlier than Sc will minimize the intrinsic scatter in the Tully-Fisher relation used as a distance indicator.