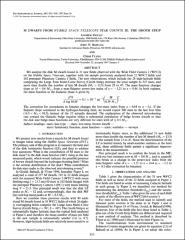 We analyze the disk M dwarfs found in 31 new fields observed with the Wide Field Camera 2 (WFC2) on the Hubble Space Telescope, together with the sample previously analyzed from 22 WFC2 fields and 162 prerepair Planetary Camera 1 fields. The new observations, which include the 28 high-latitude fields comprising the Large Area Multi-Color Survey (Groth Strip), increase the total sample to 337 stars, and more than double the number of late M dwarfs (M_V > 13.5) from 23 to 47. The mass function changes slope at M ~ 0.6 Mȯ, from a near-Salpeter power-law index of alpha = -1.21 to alpha = 0.44. In both regimes, the mass function at the Galactic plane is given by \frac {d2N}{d {log} M dV} =8.1x10^{-2} {pc}^{-3}(\frac {M}{0.59 Msun} )^α . The correction for secondaries in binaries changes the low-mass index from alpha = 0.44 to alpha ~ 0.1. If the Salpeter slope continued to the hydrogen-burning limit, we would expect 500 stars in the last four bins (14.5 < M_V < 18.5), instead of the 25 actually detected. The explanation of the observed microlensing rate toward the Galactic bulge requires either a substantial population of bulge brown dwarfs or that the disk and bulge mass functions are very different for stars with M <~ 0.5 Mȯ.