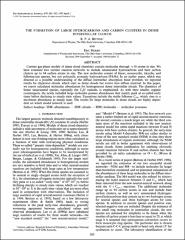 Current gas-phase models of dense cloud chemistry contain molecules through approx 10 atoms in size. We have extended two current reaction networks to include unsaturated hydrocarbons and bare carbon clusters up to 64 carbon atoms in size. The new molecules consist of linear, monocyclic, tricyclic, and fullerene/ane species, but not polycyclic aromatic hydrocarbons (PAHs). In an earlier paper, which was directed at a possible understanding of the diffuse interstellar absorption band problem, we reported results for dispersive clouds, which start as dense clouds but evolve into diffuse material. In this paper, we report calculated molecular abundances for homogeneous dense interstellar clouds. The chemistry of linear unsaturated species, especially the C_n H radicals, is emphasized. As with their smaller organic counterparts, the newly included large molecules possess abundances that mainly peak at so-called early times before declining to steady state values. Exceptions include the stable fullerene C_60, which rises to a maximum abundance at steady state. The results for large molecules in dense clouds are highly dependent on which model network is used.