On the Radiative Efficiencies, Eddington Ratios, and Duty Cycles of Luminous High-Redshift Quasars 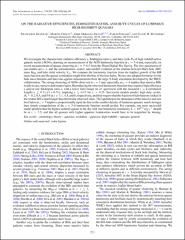 We investigate the characteristic radiative efficiency ε, Eddington ratio λ, and duty cycle P0 of high-redshift active galactic nuclei (AGNs), drawing on measurements of the AGN luminosity function at z = 3–6 and, especially, on recent measurements of quasar clustering at z = 3–4.5 from the Sloan Digital Sky Survey. The free parameters of our models are ε, λ, and the normalization, scatter, and redshift evolution of the relation between black hole (BH) mass MBH and halo virial velocity V_vir. We compute the luminosity function from the implied growth of the BH mass function and the quasar correlation length from the bias of the host halos.We test our adopted formulae for the halo mass function and halo bias against measurements from the large N-body simulation developed by the MICE collaboration. The strong clustering of AGNs observed at z = 3 and, especially, at z = 4 implies that massive BHs reside in rare,massive dark matter halos. Reproducing the observed luminosity function then requires high efficiency ε and/or low Eddington ratio λ, with a lower limit (based on 2σ agreement with the measured z = 4 correlation length) ε ~> 0.7λ/(1 + 0.7λ), implying ε ~> 0.17 for λ > 0.25. Successful models predict high duty cycles, P_0 ~ 0.2, 0.5, and 0.9 at z = 3.1, 4.5, and 6, respectively, and they require that the fraction of halo baryons locked in the central BH is much larger than the locally observed value. The rapid drop in the abundance of themassive and rare host halos at z > 7 implies a proportionally rapid decline in the number density of luminous quasars, much stronger than simple extrapolations of the z = 3–6 luminosity function would predict. For example, our most successful model predicts that the highest redshift quasar in the sky with true bolometric luminosity L > 10^47.5 erg s^−1 should be at z ~ 7.5, and that all quasars with higher apparent luminosities would have to be magnified by lensing.