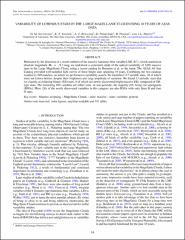 Motivated by the detection of a recent outburst of the massive luminous blue variable LMC-R71, which reached an absolute magnitude M_V = –9.3 mag, we undertook a systematic study of the optical variability of 1268 massive stars in the Large Magellanic Cloud, using a recent catalog by Bonanos et al. as the input. The ASAS All Star Catalog provided well-sampled light curves of these bright stars spanning 10 years. Combining the two catalogs resulted in 599 matches, on which we performed a variability search. We identified 117 variable stars, 38 of which were not known before, despite their brightness and large amplitude of variation. We found 13 periodic stars that we classify as eclipsing binary (EB) stars, 8 of which are newly discovered bright massive EBs composed of OB-type stars. The remaining 104 variables are either semi- or non-periodic, the majority (85) being red supergiants (RSGs). Most (26) of the newly discovered variables in this category are also RSGs with only three B and four O stars.