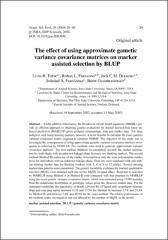 Under additive inheritance, the Henderson mixed model equations (HMME) provide an efficient approach to obtaining genetic evaluations by marker assisted best linear unbiased prediction (MABLUP) given pedigree relationships, trait and marker data. For large pedigrees with many missing markers, however, it is not feasible to calculate the exact gametic variance covariance matrix required to construct HMME. The objective of this study was to investigate the consequences of using approximate gametic variance covariance matrices on response to selection by MABLUP. Two methods were used to generate approximate variance covariance matrices. The first method (Method A) completely discards the marker information for individuals with an unknown linkage phase between two flanking markers. The second method (Method B) makes use of the marker information at only the most polymorphic marker locus for individuals with an unknown linkage phase. Data sets were simulated with and without missing marker data for flanking markers with 2, 4, 6, 8 or 12 alleles. Several missing marker data patterns were considered. The genetic variability explained by marked quantitative trait loci (MQTL) was modeled with one or two MQTL of equal effect. Response to selection by MABLUP using Method A or Method B were compared with that obtained by MABLUP using the exact genetic variance covariance matrix, which was estimated using 15 000 samples from the conditional distribution of genotypic values given the observed marker data. For the simulated conditions, the superiority of MABLUP over BLUP based only on pedigree relationships and trait data varied between 0.1% and 13.5% for Method A, between 1.7% and 23.8% for Method B, and between 7.6% and 28.9% for the exact method. The relative performance of the methods under investigation was not affected by the number of MQTL in the model.