On the origins of arrestin and rhodopsin 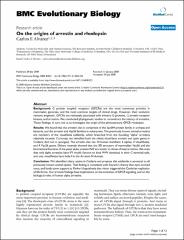 Background: G protein coupled receptors (GPCRs) are the most numerous proteins in mammalian genomes, and the most common targets of clinical drugs. However, their evolution remains enigmatic. GPCRs are intimately associated with trimeric G proteins, G protein receptor kinases, and arrestins. We conducted phylogenetic studies to reconstruct the history of arrestins. Those findings, in turn, led us to investigate the origin of the photosensory GPCR rhodopsin. Results: We found that the arrestin clan is comprised of the Spo0M protein family in archaea and bacteria, and the arrestin and Vps26 families in eukaryotes. The previously known animal arrestins are members of the visual/beta subfamily, which branched from the founding "alpha" arrestins relatively recently. Curiously, we identified both the oldest visual/beta arrestin and opsin genes in Cnidaria (but not in sponges). The arrestin clan has 14 human members: 6 alphas, 4 visual/betas, and 4 Vps26 genes. Others recently showed that the 3D structure of mammalian Vps26 and the biochemical function of the yeast alpha arrestin PalF are similar to those of beta arrestins. We note that only alpha arrestins have PY motifs (known to bind WW domains) in their C-terminal tails, and only visual/betas have helix I in the Arrestin N domain. Conclusion: We identified ciliary opsins in Cnidaria and propose this subfamily is ancestral to all previously known animal opsins. That finding is consistent with Darwin's theory that eyes evolved once, and lends some support to Parker's hypothesis that vision triggered the Cambrian explosion of life forms. Our arrestin findings have implications on the evolution of GPCR signaling, and on the biological roles of human alpha arrestins.