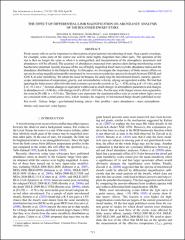 Finite source effects can be important in observations of gravitational microlensing of stars. Near caustic crossings, for example, some parts of the source star will be more highly magnified than other parts. The spectrum of the star is then no longer the same as when it is unmagnified, and measurements of the atmospheric parameters and abundances will be affected. The accuracy of abundances measured from spectra taken during microlensing events has become important recently because of the use of highly magnified dwarf stars to probe abundance ratios and the abundance distribution in the Galactic bulge. In this paper, we investigate the importance of finite source effects on spectra by using magnification profiles motivated by two events to synthesize spectra for dwarfs between 5000 K and 6200 K at solar metallicity. We adopt the usual techniques for analyzing the microlensed dwarfs, namely, spectroscopic determination of temperature, gravity, and microturbulent velocity, relying on equivalent widths. We find that ignoring the finite source effects for the more extreme case results in errors in T_eff <45 K, in log g of <0.1 dex, and in ξ of <0.1 km s^–1. In total, changes in equivalent widths lead to small changes in atmospheric parameters and changes in abundances of <0.06 dex, with changes in [Fe I/H] of <0.03 dex. For the case with a larger source-lens separation, the error in [Fe I/H] is <0.01 dex. This latter case represents the maximum effect seen in events whose light curves are consistent with a point-source lens, which includes the majority of microlensed bulge dwarfs published so far.