Constraints on the Effects of Locally Biased Galaxy Formation 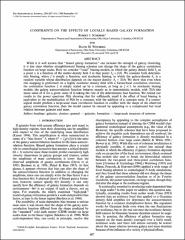 While it is well known that "biased galaxy formation" can increase the strength of galaxy clustering, it is less clear whether straightforward biasing schemes can change the shape of the galaxy correlation function on large scales. Here we consider "local" biasing models, in which the galaxy density field δ_g at a point x is a function of the matter-density field δ at that point: δ_g = f(δ). We consider both deterministic biasing, where f is simply a function, and stochastic biasing, in which the galaxy-density δ_g is a random variable whose distribution depends on the matter density: δ_g = X(δ). We show that even when this mapping is performed on a highly nonlinear density field with a hierarchical correlation structure, the correlation function ξ is simply scaled up by a constant, as long as ξ << 1. In stochastic biasing models, the galaxy autocorrelation function behaves exactly as in deterministic models, with barX(δ) (the mean value of X for a given value of δ) taking the role of the deterministic bias function. We extend our results to the power spectrum P(k), showing that for sufficiently small k the effect of local biasing is equivalent to the multiplication of P(k) by a constant, with the addition of a constant term. If a cosmological model predicts a large-scale mass correlation function in conflict with the shape of the observed galaxy correlation function, then the model cannot be rescued by appealing to a complicated but local relation between galaxies and mass.