Prospects for Determining the Equation of State of the Dark Energy: What Can Be Learned from Multiple Observables? 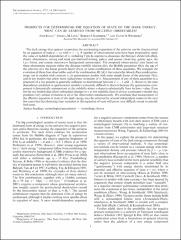 The dark energy that appears to produce the accelerating expansion of the universe can be characterized by an equation of state p = wρ with w < - 1/3. A number of observational tests have been proposed to study the value or redshift dependence of w, including Type Ia supernova distances, the Sunyaev-Zeldovich effect, cluster abundances, strong and weak gravitational lensing, galaxy and quasar clustering, galaxy ages, the Lyα forest, and cosmic microwave background anisotropies. The proposed observational tests based on these phenomena measure either the distance-redshift relation d(z), the Hubble parameter H(z), the age of the universe t(z), the linear growth factor D1(z), or some combination of these quantities. We compute the evolution of these four observables and of the combination H(z)d(z) that enters the Alcock-Paczyznski anisotropy test in models with constant w, in quintessence models with some simple forms of the potential V(ϕ), and in toy models that allow more radical time variations of w. Measurement of any of these quantities to a precision of a few percent is generally sufficient to discriminate between w = -1 and - 2/3. However, the time dependence predicted in quintessence models is extremely difficult to discern because the quintessence component is dynamically unimportant at the redshifts where w departs substantially from its low-z value. Even for the toy models that allow substantial changes in w at low redshift, there is always a constant-w model that produces very similar evolution of all of the observables simultaneously. We conclude that measurement of the effective equation of state of the dark energy may be achieved by several independent routes in the next few years but that detecting time variation in this equation of state will prove very difficult except in specialized cases.