Interview of Donald B. Glower by Bernard Bayer 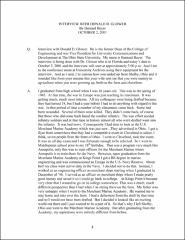