Urinary TWEAK as a biomarker of lupus nephritis: a multicenter cohort study 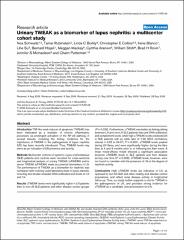 Introduction: TNF-like weak inducer of apoptosis (TWEAK) has been implicated as a mediator of chronic inflammatory processes via prolonged activation of the NF-κB pathway in several tissues, including the kidney. Evidence for the importance of TWEAK in the pathogenesis of lupus nephritis (LN) has been recently introduced. Thus, TWEAK levels may serve as an indication of LN presence and activity. Methods: Multicenter cohorts of systemic lupus erythematosus (SLE) patients and controls were recruited for cross-sectional and longitudinal analysis of urinary TWEAK (uTWEAK) and/or serum TWEAK (sTWEAK) levels as potential biomarkers of LN. The performance of TWEAK as a biomarker for nephritis was compared with routinely used laboratory tests in lupus patients, including anti-double stranded DNA antibodies and levels of C3 and C4. Results: uTWEAK levels were significantly higher in LN patients than in non-LN SLE patients and other disease control groups (P = 0.039). Furthermore, uTWEAK was better at distinguishing between LN and non-LN SLE patients than anti-DNA antibodies and complement levels, while high uTWEAK levels predicted LN in SLE patients with an odds ratio of 7.36 (95% confidence interval = 2.25 to 24.07; P = 0.001). uTWEAK levels peaked during LN flares, and were significantly higher during the flare than at 4 and 6 months prior to or following the flare event. A linear mixed-effects model showed a significant association between uTWEAK levels in SLE patients and their disease activity over time (P = 0.008). sTWEAK levels, however, were not found to correlate with the presence of LN or the degree of nephritis activity. Conclusions: High uTWEAK levels are indicative of LN, as opposed to non-LN SLE and other healthy and disease control populations, and reflect renal disease activity in longitudinal follow-up. Thus, our study further supports a role for TWEAK in the pathogenesis of LN, and provides strong evidence for uTWEAK as a candidate clinical biomarker for LN.