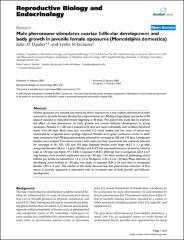 Female opossums are induced into estrus by direct exposure to a non-volatile pheromone in male scentmarks. Juvenile females develop this responsiveness by 150 days of age (days), and earlier (130 days) if exposed to male pheromone beginning at 90 days. The goal of this study was to examine the effect of male pheromone on body growth and ovarian follicular development in young opossums. Females (n = 28) were weaned at 56 days and caged individually with ad libitum food and water from 84 days. Body mass was recorded 2–3 times weekly and the onset of estrus was monitored by urogenital sinus cytology. Exposed females were given continuous access to adult male scentmarks from 90 days and randomly selected for necropsy at 105 and 130 days. Unexposed females were isolated from direct contact with males and their scentmarks and randomly selected for necropsy at 90, 105, 130, and 150 days. Exposed females were larger (63.5 ± 1.1 g) than unexposed females (56.6 ± 1.1 g) at 130 days, and 4 of 5 had expressed estrus or proestrus. Uterine mass at 130 days was higher (P < 0.05) in exposed (129.8 ± 28.8 mg) than in unexposed (25.4 ± 6.7 mg) females, none of which expressed estrus by 150 days. The mean number of developing, antral follicles per female increased from 1.5 ± 1.5 at 90 days to 17.8 ± 5.2 at 130 days. Mean diameter of developing antral follicles at 130 days was larger in exposed (534 ± 54 μm) than in unexposed females (393 ± 4 μm). The results of this study demonstrate that pheromonal induction of first estrus in juvenile opossums is associated with an increased rate of body growth and follicular development.