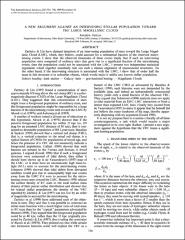 Zaritsky & Lin have claimed detection of an intervening population of stars toward the Large Magellanic Cloud (LMC), which, they believe, could account for a substantial fraction of the observed microlensing events. I show that the observed timescales of these events imply that if such an intervening population were composed of ordinary stars that gave rise to a significant fraction of the microlensing events, then the population could not be associated with the LMC. I present two independent statistical arguments which together essentially rule out such a chance alignment of unassociated structures. On the other hand, if the intervening structure is associated with the LMC, I show that of order half the mass in this structure is in substellar objects, which would make it unlike any known stellar population.