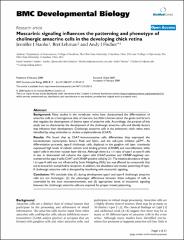 Background: Many studies in the vertebrate retina have characterized the differentiation of amacrine cells as a homogenous class of neurons, but little is known about the genes and factors that regulate the development of distinct types of amacrine cells. Accordingly, the purpose of this study was to characterize the development of the cholinergic amacrine cells and identify factors that influence their development. Cholinergic amacrine cells in the embryonic chick retina were identified by using antibodies to choline acetyltransferase (ChAT). Results: We found that as ChAT-immunoreactive cells differentiate they expressed the homeodomain transcription factors Pax6 and Islet1, and the cell-cycle inhibitor p27kip1. As differentiation proceeds, type-II cholinergic cells, displaced to the ganglion cell layer, transiently expressed high levels of cellular retinoic acid binding protein (CRABP) and neurofilament, while type-I cells in the inner nuclear layer did not. Although there is a 1:1 ratio of type-I to type-II cells in vivo, in dissociated cell cultures the type-I cells (ChAT-positive and CRABP-negative) out-numbered the type-II cells (ChAT and CRABP-positive cells) by 2:1. The relative abundance of type-I to type-II cells was not influenced by Sonic Hedgehog (Shh), but was affected by compounds that act at muscarinic acetylcholine receptors. In addition, the abundance and mosaic patterning of type-II cholinergic amacrine cells is disrupted by interfering with muscarinic signaling. Conclusion: We conclude that: (1) during development type-I and type-II cholinergic amacrine cells are not homotypic, (2) the phenotypic differences between these subtypes of cells is controlled by the local microenvironment, and (3) appropriate levels of muscarinic signaling between the cholinergic amacrine cells are required for proper mosaic patterning.