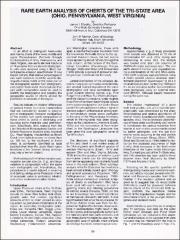 Attempts to distinguish fresh-water and marine cherts of the lower, middle, and upper Pennsylvania strata of Ohio, Pennsylvania, and West Virginia using rare earth element analysis with direct current plasma emission spectrometry is inconclusive, but the relative amounts of rare earth elements are useful in sourcing some prehistoric materials. Specifically, lithic material from Middle and Late Woodland sites in Marshall Co., West Virginia, previously misidentified as Brush Creek chert occurring some 100 km from the sites, can be confidently identified as local bedded chert from the Upper Washington limestone of the Dunkard Group outcropping only a few km distant.