Melodic Accent as an Emergent Property of Tonal Motion 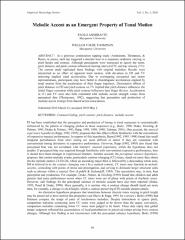 In a previous continuation tapping study (Ammirante, Thompson, & Russo, in press), each tap triggered a discrete tone in a sequence randomly varying in pitch height and contour. Although participants were instructed to ignore the tones, pitch distance and pitch contour influenced intertap interval (ITI) and tap velocity (TV). The current study replicated these findings with original melodies. Results were interpreted as an effect of apparent tonal motion, with deviation in ITI and TV mirroring implied tonal acceleration. Due to overlapping perceptual and motor representations, participants may have failed to disambiguate acceleration implied by tonal motion from the acceleration of their finger trajectory. Dissociative effects of pitch distance on ITI and pitch contour on TV implied that pitch distance influences the initial finger extension while pitch contour influences later finger flexion. Acceleration in ITI and TV were also both correlated with melodic accent strength values from perceptual data (Thomassen, 1982), suggesting that perception and production of melodic accent emerge from shared action associations.