Modes on the Move: Interval Cycles and the Emergence of Major-Minor Tonality 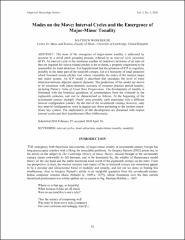 The issue of the emergence of major-minor tonality is addressed by recourse to a novel pitch grouping process, referred to as interval cycle proximity (ICP). An interval cycle is the minimum number of (additive) iterations of an interval that are required for octave-related pitches to be re-stated, a property conjectured to be responsible for tonal attraction. It is hypothesised that the actuation of ICP in cognition, possibly in the latter part of the sixteenth century, led to a hierarchy of tonal attraction which favoured certain pitches over others, ostensibly the tonics of the modern major and minor system. An ICP model is described that calculates the level of tonal attraction between adjacent musical elements. The predictions of the model are shown to be consistent with music-theoretic accounts of common practice period tonality, including Piston’s Table of Usual Root Progressions. The development of tonality is illustrated with the historical quotations of commentators from the sixteenth to the eighteenth centuries, and can be characterised as follows. At the beginning of the seventeenth century multiple ‘finals’ were possible, each associated with a different interval configuration (mode). By the end of the seventeenth century, however, only two interval configurations were in regular use: those pertaining to the modern major- minor key system. The implications of this development are discussed with respect interval cycles and their hypothesised effect within music