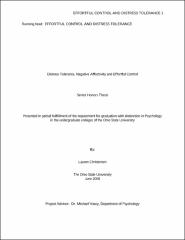 It has been well-established in the research literature that individuals high in negative affectivity (NA) are at risk to adopt dysfunctional means of regulating negative affective states. Recently, researchers have begun to investigate distress tolerance, one’s ability to tolerate NA, as a possible construct contributing to this general tendency to avoid the experience of NA in maladaptive ways. Researchers have discovered a predictive relationship between low distress tolerance levels and poor treatment prognosis for a wide variety of psychopathology (Daughters, 2005). This study investigated the role of NA and Effortful Control (EC), the ability to self-regulate NA, as possible temperamental constructs contributing to distress tolerance. The model under investigation posits that EC will moderate the relationship between NA and distress tolerance. The sample consisted of 143 Psychology 100 students at The Ohio State University. The PASAT, a task used to induce stress, was used to measure distress tolerance levels (higher PASAT scores indicated higher distress tolerance). Generally, results did not support the proposed hypotheses. However, higher levels of EC were associated with higher PASAT scores, supporting the role of EC in PASAT performance. Overall, participants in this study did not become sufficiently stressed by the PASAT, as evidenced by the failure to find a significant relationship between NA and PASAT performance.