Production of Human Paraoxonase I (huPON1) In E. coli With Periplasmic Expression and Chaperone Co-expression 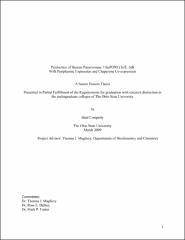 Paraoxonase-1 (PON1) catalyzes the hydrolysis of organophosphorous (OP) nerve agents and has potential as a therapeutic agent for OP poisoning. We are working on several aspects of PON1, such as understanding the catalytic residues involved in PON1, along with improving its stability and drug-like properties. Specifically, I investigated the expression of human paraoxonase 1 (huPON1) in the periplasm, the space between the plasma membrane and the peptidoglycan wall of E. coli, using Maltose Binding Protein (MBP) as a solubility enhancer of our recombinant protein. Most of the initial work was done using a chimeric (recombinant) rabbit homolog (rePON1 or G2E6) that expresses well in E. coli. However, in order to utilize PON1 therapeutically, it likely needs to be in fully humanized form. The major challenge here is the solubility and expression of human paraoxonase in bacterial systems such as E. coli. MBP fusion was used to improve the solubility of huPON1 in E. coli. The periplasmic expression is advantageous because it promotes disulfide formation; since huPON1 contains a disulfide bond, this strategy can potentially improve its soluble expression. This strategy has proven useful for other difficult-to-express proteins with disulfide bonds, such as antibody fragments. A well-expressed, stable human protein within a bacterial system will help lead us closer to finding a sufficient treatment against organophosphate poisoning. We also utilized the co-expression of molecular chaperones. One of the principal problems of expressing protein in bacterial systems is the aggregation of proteins through their interactions among one another during their folding process. This can result in protein degradation and improper native structure. Just as periplasmic expression enhances proper protein folding, the application of chaperones sets out to catalyze protein folding within the cytoplasm of E. coli. The co-expression of huPON1 with chaperone systems such as GroEL-GroES and DnaK/DnaJ/GrpE could prove to be very useful for correct protein folding.