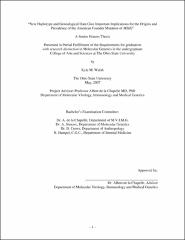 Lynch syndrome, which is also known as hereditary nonpolyposis colorectal cancer (HNPCC), is estimated to account for approximately half of all heritable colon cancers and perhaps upward of 3% of all colon cancers in the western world. This amounts to approximately 4500 cases a year in the US alone. Lynch syndrome arises as a result of mutations in genes of the mismatch repair pathway, conferring an autosomal dominant cancer predisposition with an ~80% lifetime risk of HNPCC-associated cancers. Four mismatch repair (MMR) genes, MLH1, MSH2, PMS2 and MSH6, are typically implicated in the transmission of Lynch syndrome. Large scale germline deletions within the mismatch repair gene MSH2 account for a significant proportion of all deleterious mutations in this gene, and are associated with the onset of HNPCC. A recently characterized deletion of exons 1 through 6 of MSH2 has been associated with a founder event within the United States which genealogical studies have previously dated to 1727. The sequencing of the breakpoints completed the characterization of the “American Founder Mutation” (AFM) and allowed for the separation of this deletion from that of other similar, but distinct, deletions via long-range PCR and sequencing. Here, we report the development of a robust multiplex PCR which has assisted in the detection of 24 new families who carry the AFM and the subsequent characterization of 20 patient haplotypes which flank the deletion. New genealogical data has identified a likely erroneous connection in the original pedigree analysis. As such, three further families have been linked to the original pedigree and we have now identified an alternative founding family dating to 1764, as well as five further “subfounder” groups, all of which date to the eighteenth century. The use of molecular data, combined with extensive pedigree analysis, provides independent measures of the origins of the AFM, with significant implications for the mutation’s modern prevalence in America, which has been estimated to be nearly 19,000 individuals. In this study, I have sought to gain further insight into the origin, occurrence, and spread of the AFM through improved genealogical and molecular genetic studies.