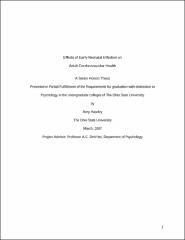 Transient focal ischemia occurs when a portion of the brain is cut off from oxygen. Damage occurs in two phases: the initial phase, during which cell death by necrosis occurs, and the secondary phase, during which cell death by apoptosis and inflammation occurs. Exposure to lipopolysaccharide (LPS), a component of the Gram-negative bacteria, initiates an innate immune response resulting in inflammation. Specifically, LPS activates cytokines which then induce cyclooxygenase-2 (COX-2) to synthesize PGE2, a prostaglandin that causes inflammation. COX-2 also contributes to the activation of the glutamate receptors during the initial stages of ischemic damage. Early LPS exposure up-regulates the basal levels of COX-2 in adulthood. To determine the role of COX-2 in stroke Escherichia coli LPS was administered to fourteen-day-old male and female neonatal mice and transient focal ischemia was later induced in adulthood. The control group was given an equal amount of pyrogen-free sterile saline solution. It was hypothesized that after induction of experimental stroke mice administered LPS would show greater stroke damage, both initially and secondarily, compared to their vehicle counterparts. To assess initial damage 24 h post-surgery mice were perfused and level of edema was determined. To assess secondary damage 72 h post-surgery infarct was measured. Behavioral deficits occurring at both 24 h and 72 h post-surgery were determined by preferential paw use and level of anxiety. Females neonatally treated with LPS had a significant decrease in infarct size 72 h post-surgery compared to their vehicle counterparts. These results are indicative of LPS acting as a neuroprotective agent against ischemic stroke. The 72 h survival females, however, showed a significant decrease in contralateral paw use compared to the vehicle suggesting that the LPS had a negative effect on behavioral outcome despite its neuroprotective capability. There was no significant effect of LPS on any of the other experimental groups. The study was reproduced with a doubled dose of LPS and no significant effect was seen across the board. This suggests that the amount of LPS administered is a critical factor. An effect only on females indicates a gender bias.