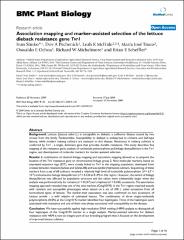 Background: Lettuce (Lactuca saliva L.) is susceptible to dieback, a soilborne disease caused by two viruses from the family Tombusviridae. Susceptibility to dieback is widespread in romaine and leaf-type lettuce, while modern iceberg cultivars are resistant to this disease. Resistance in iceberg cultivars is conferred by Tvr1 - a single, dominant gene that provides durable resistance. This study describes fine mapping of the resistance gene, analysis of nucleotide polymorphism and linkage disequilibrium in the Tvr1 region, and development of molecular markers for marker-assisted selection. Results: A combination of classical linkage mapping and association mapping allowed us to pinpoint the location of the Tvr1 resistance gene on chromosomal linkage group 2. Nine molecular markers, based on expressed sequence tags (EST), were closely linked to Tvr1 in the mapping population, developed from crosses between resistant (Salinas and Salinas 88) and susceptible (Valmaine) cultivars. Sequencing of these markers from a set of 68 cultivars revealed a relatively high level of nucleotide polymorphism (θ = 6.7 × 10-3) and extensive linkage disequilibrium (r2 = 0.124 at 8 cM) in this region. However, the extent of linkage disequilibrium was affected by population structure and the values were substantially larger when the analysis was performed only for romaine (r2 = 0.247) and crisphead (r2 = 0.345) accessions. The association mapping approach revealed that one of the nine markers (Cntg10192) in the Tvr1 region matched exactly with resistant and susceptible phenotypes when tested on a set of 200 L. sativa accessions from all horticultural types of lettuce. The marker-trait association was also confirmed on two accessions of Lactuca serriola - a wild relative of cultivated lettuce. The combination of three single-nucleotide polymorphisms (SNPs) at the Cntg10192 marker identified four haplotypes. Three of the haplotypes were associated with resistance and one of them was always associated with susceptibility to the disease. Conclusion: We have successfully applied high-resolution DNA melting (HRM) analysis to distinguish all four haplotypes of the Cntg10192 marker in a single analysis. Marker-assisted selection for dieback resistance with HRM is now an integral part of our breeding program that is focused on the development of improved lettuce cultivars.