A Cluster of Black Holes at the Galactic Center 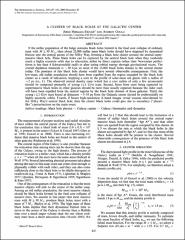 If the stellar population of the bulge contains black holes formed in the final core collapse of ordinary stars with M >~ 30 Msun, then about 25,000 stellar mass black holes should have migrated by dynamical friction into the central parsec of the Milky Way, forming a black hole cluster around the central supermassive black hole. These black holes can be captured by the central black hole when they randomly reach a highly eccentric orbit due to relaxation, either by direct capture (when their Newtonian peribothron is less than 4 Schwarzschild radii) or after losing orbital energy through gravitational waves. The overall depletion timescale is ~30 Gyr, so most of the 25,000 black holes remain in the central cluster today. The presence of this black hole cluster would have several observable consequences. First, the low-mass, old stellar population should have been expelled from the region occupied by the black hole cluster as a result of relaxation, implying a core in the profile of solar-mass red giants with a radius of ~2 pc (i.e., 1'). The observed central density cusp (which has a core radius of only a few arcseconds) should be composed primarily of young (lesssim1 Gyr) stars. Second, flares from stars being captured by supermassive black holes in other galaxies should be rarer than usually expected because the older stars will have been expelled from the central regions by the black hole clusters of those galaxies. Third, the young (<~2 Gyr) stars found at distances ~3-10 pc from the Galactic center should be preferentially on highly eccentric orbits. Fourth, if future high-resolution K-band images reveal sources microlensed by the Milky Way's central black hole, then the cluster black holes could give rise to secondary ("planet-like") perturbations on the main event.