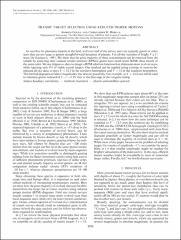 In searches for planetary transits in the field, well over half of the survey stars are typically giants or other stars that are too large to permit straightforward detection of planets. For all-sky searches of bright V <~ 11 stars, the fraction is ~90%. We show that the great majority of these contaminants can be removed from the sample by analyzing their reduced proper motions (RPMs); giants have much lower RPMs than dwarfs of the same color. We use Hipparcos data to design a RPM selection function that eliminates most evolved stars, while rejecting only 9% of viable transit targets. Our method can be applied using existing or soon-to-be-released all-sky data to stars V < 12.5 in the northern hemisphere and V < 12 in the southern hemisphere. The method degrades at fainter magnitudes, but does so gracefully. For example, at V = 14 it can still be used to eliminate giants redward of V-I ~ 0.95, that is, the blue edge of the red giant clump.