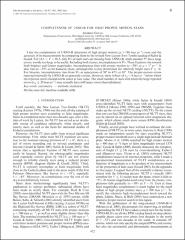 I test the completeness of USNO-B detections of high proper motion (μ>180 mas yr^-1) stars and the accuracy of its measurements by comparing them to the revised New Luyten Two-Tenths catalog of Salim & Gould. For 14.5<V<18.5, only 6% of such stars are missing from USNO-B, while another 3% have large errors, mostly too large to be useful. Including both classes, incompleteness is 9%. These fractions rise toward both brighter and fainter magnitudes. Incompleteness rises with proper motion to ~30% at μ=1" yr^-1. It also rises to ~35% at the Galactic plane, although this is only determined for relatively bright stars V<~14. For binaries, incompleteness rises from 9% at separations of 30" to 47% at 10". The proper-motion errors reported internally by USNO-B are generally correct. However, there is floor of σ_μ~4 mas yr^-1 below which the reported errors should not be taken at face value. The small number of stars with relatively large reported errors (σ_μ>~20 mas yr^-1) may actually have still larger errors than tabulated