Full disclosure of computer security vulnerabilities: an examination of the debate 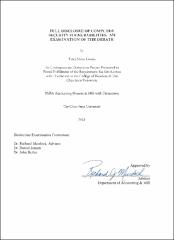