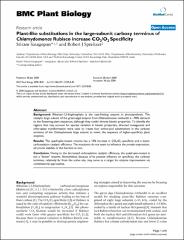 Background: Ribulose-1,5-bisphosphate is the rate-limiting enzyme in photosynthesis. The catalytic large subunit of the green-algal enzyme from Chlamydomonas reinhardtii is ~90% identical to the flowering-plant sequences, although they confer diverse kinetic properties. To identify the regions that may account for species variation in kinetic properties, directed mutagenesis and chloroplast transformation were used to create four amino-acid substitutions in the carboxy terminus of the Chlamydomonas large subunit to mimic the sequence of higher-specificity plant enzymes. Results: The quadruple-mutant enzyme has a 10% increase in CO2/O2 specificity and a lower carboxylation catalytic efficiency. The mutations do not seem to influence the protein expression, structural stability or the function in vivo. Conclusion: Owing to the decreased carboxylation catalytic efficiency, the quadruple-mutant is not a "better" enzyme. Nonetheless, because of its positive influence on specificity, the carboxy terminus, relatively far from the active site, may serve as a target for enzyme improvement via combinatorial approaches.