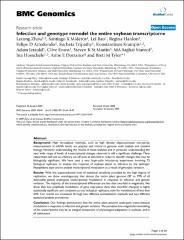 Background: High throughput methods, such as high density oligonucleotide microarray measurements of mRNA levels, are popular and critical to genome scale analysis and systems biology. However understanding the results of these analyses and in particular understanding the very wide range of levels of transcriptional changes observed is still a significant challenge. Many researchers still use an arbitrary cut off such as two-fold in order to identify changes that may be biologically significant. We have used a very large-scale microarray experiment involving 72 biological replicates to analyze the response of soybean plants to infection by the pathogen Phytophthora sojae and to analyze transcriptional modulation as a result of genotypic variation. Results: With the unprecedented level of statistical sensitivity provided by the high degree of replication, we show unambiguously that almost the entire plant genome (97 to 99% of all detectable genes) undergoes transcriptional modulation in response to infection and genetic variation. The majority of the transcriptional differences are less than two-fold in magnitude. We show that low amplitude modulation of gene expression (less than two-fold changes) is highly statistically significant and consistent across biological replicates, even for modulations of less than 20%. Our results are consistent through two different normalization methods and two different statistical analysis procedures. Conclusion: Our findings demonstrate that the entire plant genome undergoes transcriptional modulation in response to infection and genetic variation. The pervasive low-magnitude remodeling of the transcriptome may be an integral component of physiological adaptation in soybean, and in all eukaryotes.