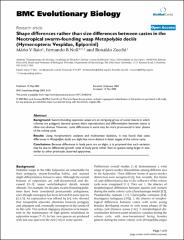 Background: Swarm-founding epiponine wasps are an intriguing group of social insects in which colonies are polygynic (several queens share reproduction) and differentiation between castes is often not obvious. However, caste differences in some may be more pronounced in later phases of the colony cycle. Results: Using morphometric analyses and multivariate statistics, it was found that caste differences in Metapolybia docilis are slight but more distinct in latter stages of the colony cycle. Conclusions: Because differences in body parts are so slight, it is proposed that such variation may be due to differential growth rates of body parts rather than to queens being larger in size, similar to other previously observed epiponines.