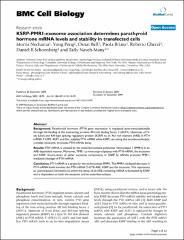 Background: Parathyroid hormone (PTH) gene expression is regulated post-transcriptionally through the binding of the trans-acting proteins AU rich binding factor 1 (AUF1), Upstream of N-ras (Unr) and KH-type splicing regulatory protein (KSRP) to an AU rich element (ARE) in PTH mRNA 3'-UTR. AUF1 and Unr stabilize PTH mRNA while KSRP, recruiting the exoribonucleolytic complex exosome, promotes PTH mRNA decay. Results: PTH mRNA is cleaved by the endoribonuclease polysomal ribonuclease 1 (PMR1) in an ARE-dependent manner. Moreover, PMR1 co-immunoprecipitates with PTH mRNA, the exosome and KSRP. Knock-down of either exosome components or KSRP by siRNAs prevents PMR1-mediated cleavage of PTH mRNA. Conclusion: PTH mRNA is a target for the endonuclease PMR1. The PMR1 mediated decrease in PTH mRNA levels involves the PTH mRNA 3'-UTR ARE, KSRP and the exosome. This represents an unanticipated mechanism by which the decay of an ARE-containing mRNA is facilitated by KSRP and is dependent on both the exosome and an endoribonuclease.