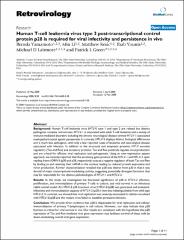 Background: Human T-cell leukemia virus (HTLV) type 1 and type 2 are related but distinct pathogenic complex retroviruses. HTLV-1 is associated with adult T-cell leukemia and a variety of immune-mediated disorders including the chronic neurological disease termed HTLV-1-associated myelopathy/tropical spastic paraparesis. In contrast, HTLV-2 displays distinct biological differences and is much less pathogenic, with only a few reported cases of leukemia and neurological disease associated with infection. In addition to the structural and enzymatic proteins, HTLV encodes regulatory (Tax and Rex) and accessory proteins. Tax and Rex positively regulate virus production and are critical for efficient viral replication and pathogenesis. Using an over-expression system approach, we recently reported that the accessory gene product of the HTLV-1 and HTLV-2 open reading frame (ORF) II (p30 and p28, respectively) acts as a negative regulator of both Tax and Rex by binding to and retaining their mRNA in the nucleus, leading to reduced protein expression and virion production. Further characterization revealed that p28 was distinct from p30 in that it was devoid of major transcriptional modulating activity, suggesting potentially divergent functions that may be responsible for the distinct pathobiologies of HTLV-1 and HTLV-2. Results: In this study, we investigated the functional significance of p28 in HTLV-2 infection, proliferation, and immortaliztion of primary T-cells in culture, and viral survival in an infectious rabbit animal model. An HTLV-2 p28 knockout virus (HTLV-2Δp28) was generated and evaluated. Infectivity and immortalization capacity of HTLV-2Δp28 in vitro was indistinguishable from wild type HTLV-2. In contrast, we showed that viral replication was severely attenuated in rabbits inoculated with HTLV-2Δp28 and the mutant virus failed to establish persistent infection. Conclusion: We provide direct evidence that p28 is dispensable for viral replication and cellular immortalization of primary T-lymphocytes in cell culture. However, our data indicate that p28 function is critical for viral survival in vivo. Our results are consistent with the hypothesis that p28 repression of Tax and Rex-mediated viral gene expression may facilitate survival of these cells by down-modulating overall viral gene expression.