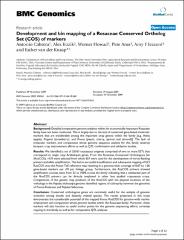 Background: Detailed comparative genome analyses within the economically important Rosaceae family have not been conducted. This is largely due to the lack of conserved gene-based molecular markers that are transferable among the important crop genera within the family [e.g. Malus (apple), Fragaria (strawberry), and Prunus (peach, cherry, apricot and almond)]. The lack of molecular markers and comparative whole genome sequence analysis for this family severely hampers crop improvement efforts as well as QTL confirmation and validation studies. Results: We identified a set of 3,818 rosaceaous unigenes comprised of two or more ESTs that correspond to single copy Arabidopsis genes. From this Rosaceae Conserved Orthologous Set (RosCOS), 1039 were selected from which 857 were used for the development of intron-flanking primers and allele amplification. This led to successful amplification and subsequent mapping of 613 RosCOS onto the Prunus TxE reference map resulting in a genome-wide coverage of 0.67 to 1.06 gene-based markers per cM per linkage group. Furthermore, the RosCOS primers showed amplification success rates from 23 to 100% across the family indicating that a substantial part of the RosCOS primers can be directly employed in other less studied rosaceaous crops. Comparisons of the genetic map positions of the RosCOS with the physical locations of the orthologs in the Populus trichocarpa genome identified regions of colinearity between the genomes of Prunus-Rosaceae and Populus-Salicaceae. Conclusion: Conserved orthologous genes are extremely useful for the analysis of genome evolution among closely and distantly related species. The results presented in this study demonstrate the considerable potential of the mapped Prunus RosCOS for genome-wide marker employment and comparative whole genome studies within the Rosaceae family. Moreover, these markers will also function as useful anchor points for the genome sequencing efforts currently ongoing in this family as well as for comparative QTL analyses.