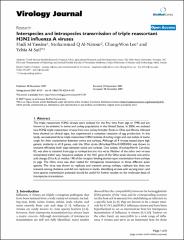 The triple reassortant H3N2 viruses were isolated for the first time from pigs in 1998 and are known to be endemic in swine and turkey populations in the United States. In 2004, we isolated two H3N2 triple reassortant viruses from two turkey breeder flocks in Ohio and Illinois. Infected hens showed no clinical signs, but experienced a complete cessation of egg production. In this study, we evaluated three triple reassortant H3N2 isolates of turkey origin and one isolate of swine origin for their transmission between swine and turkeys. Although all 4 viruses tested share high genetic similarity in all 8 genes, only the Ohio strain (A/turkey/Ohio/313053/04) was shown to transmit efficiently both ways between swine and turkeys. One isolate, A/turkey/North Carolina/03, was able to transmit from pigs to turkeys but not vice versa. Neither of the other two viruses transmitted either way. Sequence analysis of the HA1 gene of the Ohio strain showed one amino acid change (D to A) at residue 190 of the receptor binding domain upon transmission from turkeys to pigs. The Ohio virus was then tested for intraspecies transmission in three different avian species. The virus was shown to replicate and transmit among turkeys, replicate but does not transmit among chickens, and did not replicate in ducks. Identifying viruses with varying inter- and intra-species transmission potential should be useful for further studies on the molecular basis of interspecies transmission.