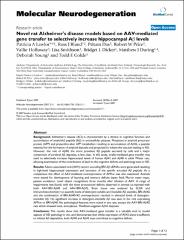 Background: Alzheimer's disease (AD) is characterized by a decline in cognitive function and accumulation of amyloid-β peptide (Aβ) in extracellular plaques. Mutations in amyloid precursor protein (APP) and presenilins alter APP metabolism resulting in accumulation of Aβ42, a peptide essential for the formation of amyloid deposits and proposed to initiate the cascade leading to AD. However, the role of Aβ40, the more prevalent Aβ peptide secreted by cells and a major component of cerebral Aβ deposits, is less clear. In this study, virally-mediated gene transfer was used to selectively increase hippocampal levels of human Aβ42 and Aβ40 in adult Wistar rats, allowing examination of the contribution of each to the cognitive deficits and pathology seen in AD. Results: Adeno-associated viral (AAV) vectors encoding BRI-Aβ cDNAs were generated resulting in high-level hippocampal expression and secretion of the specific encoded Aβ peptide. As a comparison the effect of AAV-mediated overexpression of APPsw was also examined. Animals were tested for development of learning and memory deficits (open field, Morris water maze, passive avoidance, novel object recognition) three months after infusion of AAV. A range of impairments was found, with the most pronounced deficits observed in animals co-injected with both AAV-BRI-Aβ40 and AAV-BRI-Aβ42. Brain tissue was analyzed by ELISA and immunohistochemistry to quantify levels of detergent soluble and insoluble Aβ peptides. BRI-Aβ42 and the combination of BRI-Aβ40+42 overexpression resulted in elevated levels of detergentinsoluble Aβ. No significant increase in detergent-insoluble Aβ was seen in the rats expressing APPsw or BRI-Aβ40. No pathological features were noted in any rats, except the AAV-BRI-Aβ42 rats which showed focal, amorphous, Thioflavin-negative Aβ42 deposits. Conclusion: The results show that AAV-mediated gene transfer is a valuable tool to model aspects of AD pathology in vivo, and demonstrate that whilst expression of Aβ42 alone is sufficient to initiate Aβ deposition, both Aβ40 and Aβ42 may contribute to cognitive deficits.