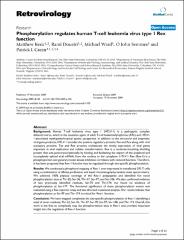 Background: Human T-cell leukemia virus type 1 (HTLV-1) is a pathogenic complex deltaretrovirus, which is the causative agent of adult T-cell leukemia/lymphoma (ATL) and HTLV- 1-associated myelopathy/tropical spastic paraparesis. In addition to the structural and enzymatic viral gene products, HTLV-1 encodes the positive regulatory proteins Tax and Rex along with viral accessory proteins. Tax and Rex proteins orchestrate the timely expression of viral genes important in viral replication and cellular transformation. Rex is a nucleolar-localizing shuttling protein that acts post-transcriptionally by binding and facilitating the export of the unspliced and incompletely spliced viral mRNAs from the nucleus to the cytoplasm. HTLV-1 Rex (Rex-1) is a phosphoprotein and general protein kinase inhibition correlates with reduced function. Therefore, it has been proposed that Rex-1 function may be regulated through site-specific phosphorylation. Results: We conducted a phosphoryl mapping of Rex-1 over-expressed in transfected 293 T cells using a combination of affinity purification and liquid chromatography tandem mass spectrometry. We achieved 100% physical coverage of the Rex-1 polypeptide and identified five novel phosphorylation sites at Thr-22, Ser-36, Thr-37, Ser-97, and Ser-106. We also confirmed evidence of two previously identified residues, Ser-70 and Thr-174, but found no evidence of phosphorylation at Ser-177. The functional significance of these phosphorylation events was evaluated using a Rex reporter assay and site-directed mutational analysis. Our results indicate that phosphorylation at Ser-97 and Thr-174 is critical for Rex-1 function. Conclusion: We have mapped completely the site-specific phosphorylation of Rex-1 identifying a total of seven residues; Thr-22, Ser-36, Thr-37, Ser-70, Ser-97, Ser-106, and Thr-174. Overall, this work is the first to completely map the phosphorylation sites in Rex-1 and provides important insight into the regulation of Rex-1 function.