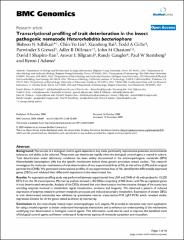 Background: The success of a biological control agent depends on key traits, particularly reproductive potential, environmental tolerance, and ability to be cultured. These traits can deteriorate rapidly when the biological control agent is reared in culture. Trait deterioration under laboratory conditions has been widely documented in the entomopathogenic nematode (EPN) Heterorhabditis bacteriophora (Hb) but the specific mechanisms behind these genetic processes remain unclear. This research investigates the molecular mechanisms of trait deterioration of two experimental lines of Hb, an inbred line (L5M) and its original parental line (OHB). We generated transcriptional profiles of two experimental lines of Hb, identified the differentially expressed genes (DEGs) and validated their differential expression in the deteriorated line. Results: An expression profiling study was performed between experimental lines L5M and OHB of Hb with probes for 15,220 ESTs from the Hb transcriptome. Microarray analysis showed 1,185 DEGs comprising of 469 down- and 716 up-regulated genes in trait deteriorated nematodes. Analysis of the DEGs showed that trait deterioration involves massive changes of the transcripts encoding enzymes involved in metabolism, signal transduction, virulence and longevity. We observed a pattern of reduced expression of enzymes related to primary metabolic processes and induced secondary metabolism. Expression of sixteen DEGs in trait deteriorated nematodes was validated by quantitative reverse transcription-PCR (qRT-PCR) which revealed similar expression kinetics for all the genes tested as shown by microarray. Conclusion: As the most closely related major entomopathogen to C. elegans, Hb provides an attractive near-term application for using a model organism to better understand interspecies interactions and to enhance our understanding of the mechanisms underlying trait deterioration in biological control agents. This information could also be used to improve the beneficial traits of biological control agents and better understand fundamental aspects of nematode parasitism and mutualism.