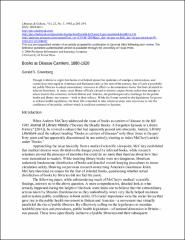 Though evidence is slight that books ever helped spread the epidemics of smallpox, tuberculosis, and scarlet fever that raged in American and European cities at the turn of the century, fear of such a possibility led public libraries to adopt extraordinary measures in efforts to decontaminate books that had circulated to infected borrowers. In many cases library officials elected to destroy suspect books rather than attempt to return them to the collection. In both Britain and America, the problem proved a challenge for the public health and library movements—both in their infancy. While the former turned to the legislatures for power to enforce health regulations, the latter felt compelled to take whatever steps were necessary to win the confidence of the public, without which it could not continue to function.