Does switching from oral extended-release methylphenidate to the methylphenidate transdermal system affect health-related quality-of-life and medication satisfaction for children with attention-deficit/hyperactivity disorder? 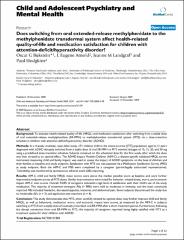 Background: To evaluate health-related quality of life (HRQL) and medication satisfaction after switching from a stable dose of oral extended-release methylphenidate (ER-MPH) to methylphenidate transdermal system (MTS) via a dose-transition schedule in children with attention-deficit/hyperactivity disorder (ADHD). Methods: In a 4-week, multisite, open-label study, 171 children (164 in the intent-to-treat [ITT] population) aged 6-12 years diagnosed with ADHD abruptly switched from a stable dose of oral ER-MPH to MTS nominal dosages of 10, 15, 20, and 30 mg using a predefined dose-transition schedule. Subjects remained on the scheduled dose for the first week, after which the dose was then titrated to an optimal effect. The ADHD Impact Module-Children (AIM-C), a disease-specific validated HRQL survey instrument measuring child and family impact, was used to assess the impact of ADHD symptoms on the lives of children and their families at baseline and study endpoint. Satisfaction with MTS use was assessed via a Medication Satisfaction Survey (MSS) at study endpoint. Both the AIM-C and MSS were completed by a caregiver (parent/legally authorized representative). Tolerability was monitored by spontaneous adverse event (AE) reporting. Results: AIM-C child and family HRQL mean scores were above the median possible score at baseline and were further improved at endpoint across all MTS doses. Similar improvements were noted for behavior, missed doses, worry, and economic impact AIM-C item scores. Overall, 93.8% of caregivers indicated a high level of satisfaction with their child's use of the study medication. The majority of treatment-emergent AEs (> 98%) were mild to moderate in intensity, and the most commonly reported AEs included headache, decreased appetite, insomnia, and abdominal pain. Seven subjects discontinued the study due to intolerable AEs (n = 3) and application site reactions (n = 4). Conclusion: This study demonstrates that MTS, when carefully titrated to optimal dose, may further improve child and family HRQL, as well as behavioral, medication worry, and economic impact item scores, as measured by the AIM-C in subjects switching to MTS from a stable dose of routinely prescribed oral ER-MPH after a short treatment period. Furthermore, following the abrupt conversion from oral ER-MPH to MTS, the majority of caregivers reported being highly satisfied with MTS as a treatment option for their children with ADHD. Trial Registration: NCT00151983