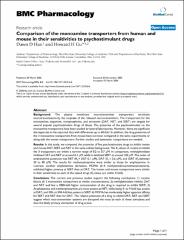 Background: The plasma membrane neurotransmitter transporters terminate neurotransmissions by the reuptake of the released neurotransmitters. The transporters for the monoamines dopamine, norepinephrine, and serotonin (DAT, NET, and SERT) are targets for several popular psychostimulant drugs of abuse. The potencies of the psychostimulant on the monoamine transporters have been studied by several laboratories. However, there are significant discrepancies in the reported data with differences up to 60-fold. In addition, the drug potencies of the 3 monoamine transporters from mouse have not been compared in the same experiments or along side the human transporters. Further studies and systematic comparisons are needed. Results: In this study, we compared the potencies of five psychostimulant drugs to inhibit human and mouse DAT, SERT and NET in the same cellular background. The KI values of cocaine to inhibit the 3 transporters are within a narrow range of 0.2 to 0.7 μM. In comparison, methylphenidate inhibited DAT and NET at around 0.1 μM, while it inhibited SERT at around 100 μM. The order of amphetamine potencies was NET (KI = 0.07–0.1 μM), DAT (KI ≈ 0.6 μM), and SERT (KI between 20 to 40 μM). The results for methamphetamine were similar to those for amphetamine. In contrast, another amphetamine derivative, MDMA (3–4 methylenedioxymethamphetamine), exhibited higher potency at SERT than at DAT. The human and mouse transporters were similar in their sensitivities to each of the tested drugs (KI values are within 4-fold). Conclusion: The current and previous studies support the following conclusions: 1) cocaine blocks all 3 monoamine transporters at similar concentrations; 2) methylphenidate inhibits DAT and NET well but a 1000-fold higher concentration of the drug is required to inhibit SERT; 3) Amphetamine and methamphetamine are most potent at NET, while being 5- to 9-fold less potent at DAT, and 200- to 500-fold less potent at SERT; 4) MDMA has moderately higher apparent affinity for SERT and NET than for DAT. The relative potencies of a drug to inhibit DAT, NET and SERT suggest which neurotransmitter systems are disrupted the most by each of these stimulants and thus the likely primary mechanism of drug action.