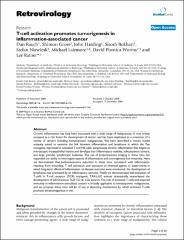 Chronic inflammation has long been associated with a wide range of malignancies, is now widely accepted as a risk factor for development of cancer, and has been implicated as a promoter of a variety of cancers including hematopoietic malignancies. We have described a mouse model uniquely suited to examine the link between inflammation and lymphoma in which the Tax oncogene, expressed in activated T and NK cells, perpetuates chronic inflammation that begins as microscopic intraepithelial lesions and develops into inflammatory nodules, subcutaneous tumors, and large granular lymphocytic leukemia. The use of bioluminescent imaging in these mice has expanded our ability to interrogate aspects of inflammation and tumorigenesis non-invasively. Here we demonstrate that bioluminescence induction in these mice correlated with inflammation resulting from wounding, T cell activation, and exposure to chemical agents. In experiments in which long-term effects of inflammation on disease outcome were monitored, the development of lymphoma was promoted by an inflammatory stimulus. Finally we demonstrated that activation of T-cells in T-cell receptor (TCR) transgenic TAX-LUC animals dramatically exacerbated the development of subcutaneous TCR- CD16+ LGL tumors. The role of activated T-cells and acquired immunity in inflammation-associated cancers is broadly applicable to hematopoietic malignancies, and we propose these mice will be of use in dissecting mechanisms by which activated T-cells promote lymphomagenesis in vivo.