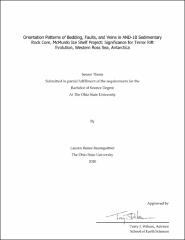 The McMurdo Ice Shelf project recovered 1285 m of Neogene sedimentary rock core from the Victoria Land rift basin, Antarctica. The core contains over 1475 natural fractures of faults, veins, and clastic dikes. This study measured and mapped the attitudes and locations of bedding and natural fractures in select intact core intervals of AND-1B core to determine structure orientation. Whole-core scanned images were loaded into DMT CoreBase® software and manipulated to create digital intact intervals of core, joining core run breaks and correcting misfits that occurred during scanning. CoreBase® was used make independent orientation measurements of bedding and natural fractures within the core by drawing a ‘best fit’ sinusoid to each structure. Stereoplots were made for each intact interval to show whether there were systematic orientations of bedding and of each fracture type. The digital measurements were then compared with hand-measured orientations of the same structural features made during core logging. Twenty-four intact core intervals were analyzed and compared. Analysis of bedding orientation revealed that dip angle steepens with depth. Bedding within oriented intervals may be used to orient more core segments in the future. Results of comparing the two structural measurement methods indicate that both have strengths and weaknesses. Measurements during core logging can be made on fractures that are small and lack visible vein fill. These fracture types are not observable on digital images in the CoreBase® software. However, core logging methods can not measure the overall attitude of irregular veins and measurements on fractures exposed on the blue-scribed side of the core were commonly in error. Using the CoreBase® software, measurements are made viewing the whole core surface, giving a better overall attitude measurement. Weaknesses in CoreBase® methods are associated with the low resolution of the digital images once they are loaded into the software. This results in a smaller fracture population, missing many of the faults in particular, because they are not visible and therefore can’t be measured within CoreBase®. This comparison will help to guide future core-based fracture logging studies.