Violence, Politics and Culture in the Weimar Era – The Second Kulturkampf 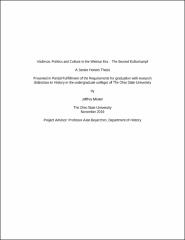 The Weimar Era was a tumultuous time in German history. The fledgling Republic faced political opposition both from the left and the right but more importantly it faced fundamental opposition from the traditionalists that viewed the Republic as a foreign institution that would enable progressives to change the fabric of German culture. The Kulturkampf that Otto von Bismarck waged against Catholics and socialists in the closing decades of the 19th century was reignited, but this time the target was not "un-German" religious and political groups but rather the section of society that had come to embody and represent traditional German values. During the Weimar Era, Berlin underwent a unparalleled culture change; playing host to international progressives as well as allowing the creation of institutions that openly mocked conservative German values. This was contrasted by smaller villages and towns, in which the people still strongly clung to traditional German values. This dichotomy led to a bitter resentment between the two groups, which manifested itself in the form of extreme political violence. Extremist groups on the right absorbed the concerns of those stuck in middle and turned them against the Republic in the form of stiff political opposition and assassinations. The Republic was demonized as a foreign institution that was threatening to destroy the essence of German Kultur. Beneath this weight, the fledgling Republic was unable to instill the principles of democracy and as a result it was forced to concede power to those who sought its destruction.